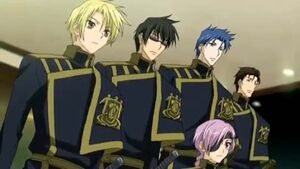 They are Ayanami's most loyal subordinates who accompany him on his missions. With the execption of Konatsu, They are all Warsphile users and are able to use Warsfeil.

One of Ayanami's subordinates. He refers to Ayanami as 'Aya-tan'. He is almost never seen without a lollipop (or candy apple thing) in his mouth and is always wearing dark sunglasses. He is always joking, being silly and never acts serious. This is shown in an omake when he and Frau attend a parent teacher meeting and embarrass Konatsu and Teito. Hyuuga is also very skilled with the sword. He seems to be very loyal to Ayanami, once stating that Ayanami was his 'one and only king.'

Hyuuga's subordinate, he often gets exasperated at Hyuuga for failing to do his work. Recently, he also has to put up with Shuuri, who idolizes him. He is often the 'normal one' in a group full of crazy people and is shown 'reaching his limit' when no one is doing any work and are just playing around. This is interesting as it humanizes the villains.

Konatsu was born to a prominent family known for being gifted with warsfeil users. However, as Konatsu was born without the powers of warsfeil, he was shunned by his entire family, save for his grandfather who taught him swordsmanship under the instruction that if he could join the Black Hawks he might be accepted by his family. As such, Konatsu is an excellent swordsman, achieving had top marks in the examination and having never lost a battle.

With these merits, Konatsu applies for a spot on the Black Hawks and is rejected because, despite his skill, he lacks the power of warsfeil. Upon receiving his rejection, he sees Hyuuga practicing with his sword and is challenged to a match. The conditions are that if Konatsu can land one "hit" on Hyuuga, Hyuuga would give him a sword.

The match is easily one-sided, with Hyuuga breaking Konatsu's arm and several of his ribs. Yet despite his clear disadvantage, Konatsu refuses to give up. After he has passed out from his injuries and Hyuuga is checking his body, Konatsu lashes out at him, unconsciously, grabbing Hyuuga's throat and scoring a "hit." When Konatsu wakes up in hospital, Hyuuga is there and rewards him with a sword and a spot in the Black Hawks.

The youngest of Ayanami's subordinates, Kuroyuri often goes on missions with Haruse. He/she is fanatically devoted to Ayanami and hates the Ghosts (particularly Frau). He/she seems to make a hobby of killing things and otherwise making things gory, as seen when Kuroyuri sits on mountains of corpses[, mutilates bodies, and frequently asks for permission to kill things. He/she seems to have a strong relationship with Haruse.

Kuroyuri's gender is actually a point of contention in the manga. In one omake panel, Konatsu asks for an answer to which Kuroyuri's response is that it's a secret. When Hyuuga prods him/her again for an answer, Kuroyuri asks "Do you want to die?". In the anime profiles, Kuroyuri is noted to wear his/her hair like a woman's (a woman's braid), but his/her gender is unknown. In the manga and anime, Kuroyuri refers to his/herself as "boku", which is a submissive form of "I" used by both younger boys and tomboyish girls in Japan. Kuroyuri also seems to be bad at cooking. In volume 2's omake, Kuroyuri cooked Sashimi with strawberry jam, eggs with chocolate and a bluish food, which causes Hyuuga and Haruse to faint dead after they've eaten it.

Kuroyuri's subordinate, who often accompanies Kuroyuri on missions. Later in the story, it appears his soul was 'taken' by the Eye of Mikhail when he separated Mikhail and Teito.

Another one of Ayanami's subordinates, he has brown hair and his appearance seems like an middle aged young man who prefers office work rather than fighting.