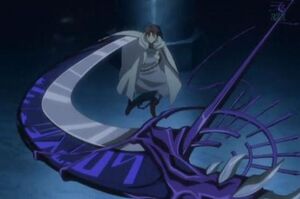 This is Verloren's signature weapon. Its appearance is demonic and more complex than the scythes of the seven Ghosts. It seem to has a will of it own as seen when it tried to attack Teito Klein unconsciously which resulted in the awakening of the Eye of Mikhail.

This scythe is currently in Frau's possession and he is the only 07-Ghost who can wield this scythe. However, how the scythe came into Frau's possession is still unknown. If Frau loses his Ghost powers he will no longer be able to wield the scythe. The owner of this scythe is later revealed to be Ayanami, who is actually Verloren's reincarnation. According to Ayanami, it is destined to return to him one day and tells Frau to use it carefully.